Beware of Financial Fraud & Ponzi Schemes: Too Good To Be True - Truth or Fiction?

Recent news headlines should remind investors about the dangers of “get-rich- quick” Ponzi Fraud Schemes.1 Such financial disasters exemplify the necessity of prudent and diligent verification before considering what are likely to be "too good to be true” investment opportunities.

The Los Angeles Times recently reported that small-time actor Zachary Horwitz, AKA stage name Zach Avery, was indicted for raising more than $690,000,000 in short-term, high-yield loans over five (5) years in a massive Ponzi scheme. In his indictment, the FBI alleges Horwitz has defrauded investors out of $227 million; falsely claiming to investors that his 1inMM Capital LLC owned movie licensing deals with HBO on Netflix to distribute the films in Africa, South America, Australia, and New Zealand. The movie specific loans were for 6 to 12 months, yielding 35% to 43%, depending upon the movie as reported in the Los Angeles Times.

Below is a picture of examples of Promissory Notes, Horwitz offered to investors: 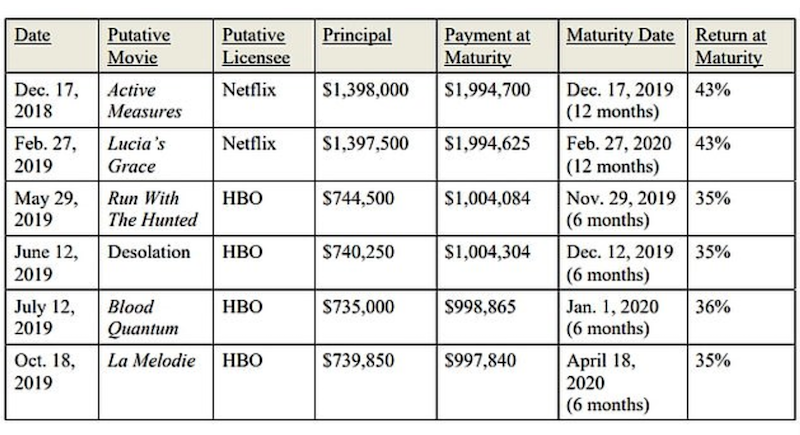 Both of these alleged safe and phenomenal investment opportunities had all of the indices of Ponzi scheme2, as well as many other securities fraud characteristics which should have raised red flags to both investors and their counsel. The below dubious characteristics of the investment opportunities should have heightened the need for, and the scope of, due diligence investigations and verifications.

What is a Ponzi scheme? A Ponzi Scheme is a form of fraud in which belief in the success of a nonexistent enterprise is fostered by the payment of quick returns to the first investors from the money invested by the later investors.3

Indices of Ponzi scheme. According to the Securities and Exchange Commission (SEC), many Ponzi schemes share similar characteristics that should be "red flags" for investors. Some of the warning signs were:

Security Fraud Characteristics. Both security fraud schemes had questionable characteristics which indicated a riskier investment opportunity and should have prompted a greater need for investigations, verifications, and due diligence procedures:

Ponzi scheme organizers often promise high returns with little or no risk and use money from new investors to pay earlier investors. They often steal some of the money for themselves. Zachary Horowitz purchased a $5.5 million home, spent hundred thousand dollars on Las Vegas trips and paid off a $1.8 million American Express bill. Champion-Cain directed significant amounts of investor funds to companies she controlled, as well as to herself and family members, and approximately 40 other businesses, including restaurants, rental properties, coffee shops and a surfing supply store.

A disturbing characteristic in the Horwitz Ponzi scheme was the gross negligent involvement of newly formed investment funds and fund advisory companies whose founders and managing partners had very limited financial experience and success.

Avoiding Ponzi schemes. In addition to greed, one of the attractive lures of a Ponzi scheme is that the publicity from the seemingly successful initial investment activity seduces later investors due to validating high return to the initial investors. Many investors are attracted to the Ponzi scheme by their colleagues’ or friends’ boastful praises of the payoff of the exorbitant returns.4 When it becomes hard to attract new additional later investors, or when large numbers of existing investors cash out, Ponzi schemes tend to collapse.5 And then it is too late.6 Moreover, if the fraudsters of a Ponzi scheme are facing the likelihood of imminent collapse and criminal charges, they may see little additional "risk" to themselves in attempting cover their tracks by engaging in further illegal acts, sending fake emails, and doctoring documentation, lies, and raising additional Ponzi funds.

In order to avoid Ponzi schemes a disciplined review by legal and investment advisors would mitigate and prevent the risk of an investor being a victim of a Ponzi scheme collapse. Below are some lessons to be learned from these two Ponzi schemes.

1 Also, news stories recently reported the death of one of the most infamous Ponzi scheme swindlers, Bernie Madoff on April 13, 2021

2 Ponzi schemes are named after Charles Ponzi. In the 1920s, Ponzi promised investors a 50% return within a few months for what he claimed was an investment in international mail coupons. Ponzi used funds from new investors to pay fake “returns” to earlier investors.

4 The first investor in the Champion-Cain scheme brought in other investors who invested an additional $50,000,000 in the liquor license Ponzi scheme.

5 The collapse is often caused by a run on the market, economic recession, sharp decline in the economy, panic, a whistleblower, news related to the investment activity, or the promoter fraudster vanishing and absconding with the funds.

6 Especially with lightly regulated investment activities, in the absence of a whistleblower and/or accompanying illegal acts, any fraudulent content in reports is often difficult to detect unless and until the investment vehicles ultimately collapse.

7 The term "boiler room" refers to an operation using high pressure sales tactics to induce the sale of stocks, other securities, or commodities.

Contact Us
Practice Areas
Client Reviews
★★★★★
For creative solutions to complex legal issues, I often turn to the attorneys at Silicon Valley Law Group. They are one of the law firms I have come to trust for providing consistently superior, responsive legal services. John A. Sobrato
★★★★★
The litigation team gave me the muscle, organizational skills and attention to detail I needed against our major competitor and got us a great result. Jon Burney
★★★★★
I expected legal competence from SVLG and they delivered on that expectation. But they went beyond my expectations in two important ways. Dick Haiduck
View More
Submit a Law Firm Client Review